Our guide to the Nelson Tasman District The Abel Tasman is New Zealand’s most iconic national park. The Abel Tasman’s popularity with New Zealanders and visitors from overseas is due to its unique combination of lush native forest, golden-sand beaches and crystal clear waters.

One of the greatest appeals of the Abel Tasman is that it is safe, easy to navigate and does not require any previous wilderness experience. For many people the Abel Tasman is a first taste of how soulful and invigorating it is to spend time in the great Kiwi outdoors.

The Abel Tasman has beaches and bays that are sheltered from most sea currents and coastal winds, making it equally perfect for novice and seasoned kayakers. The Abel Tasman Coastal Track is one of New Zealand’s nine Great Walks. With campsites and huts dotted along its 60 km (37 mi) length, the Park can be experienced as a multi-day, one-day or half-day adventure.

The National Park was founded was in 1942. It is New Zealand’s smallest, but also its most iconic national park. With a seemingly endless array of picture perfect panoramic vistas, the Abel Tasman is equally popular for Kiwis as it is for overseas visitors. 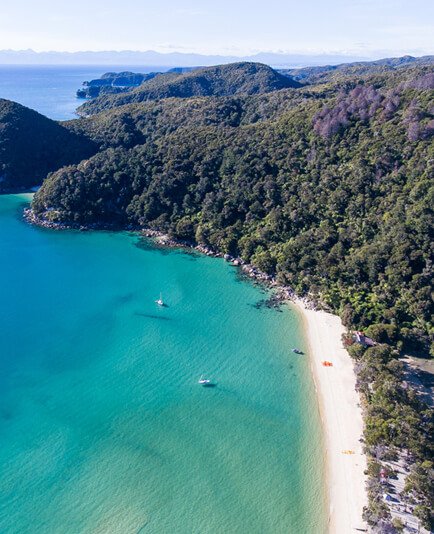 The Abel Tasman is a landscape full of stories. Maori lived in the area up to 700 years ago, and it was not visited by European explorers until 1642 when Dutch Explorer Abel Janszoon Tasman found himself lost in the area whilst trying to find what we now call Australia. The story of Tasman’s first encounter with the local Maori is a textbook case of cultural misunderstanding that resulted in the death of four of his crew members.

On the 29th of March 1770 Englishman Captain Cook sailed past the area without landing, naming it Blind Bay. Then on the 14th of January 1827 Frenchman Jules Dumont D’Urville rounded, and named, Separation Point on his vessel Astrolabe. He sailed south and anchored in the sheltered waters of what we now call the Astrolabe Roadstead. The local Maori were amicable towards D’Urville and his crew so they stayed in huts on the beach and explored the area. He named many of the landmarks in the area: Watering Cove where they gathered fresh water, Observation Beach where they observed the transit of Venus across the sun, Adele Island after his wife, plus Coquille Bay, Cyathea Cove and Fisherman Island to name a few.

After a determined and ongoing conservation effort by a couple of key organisations over the past 10 or so years the Park’s native bush and birdlife has never been in better shape than before human settlement in the area. 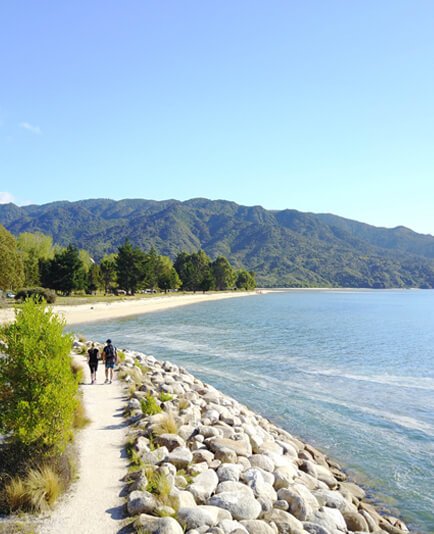 Located at the top of New Zealand’s South Island, the Nelson Tasman District is bordered by Tasman and Golden Bays and inland by lush, forested mountain ranges.

You would expect Kiwis to know their own country better than anybody else. It speaks volumes therefore, that the Nelson Tasman District is where New Zealanders come for their own holidays. With among the most sunshine hours of any region in New Zealand, and three national parks, Nelson Tasman has always been something of a mecca for outdoor adventure seekers.

Marahau, also known as the Abel Tasman Village, is the doorway to the Abel Tasman National Park. Located right at the southern entrance to the Park, Marahau is a traditional rural village with a year-round community of farmers, artisans and tourism operators.

Nelson is the region’s largest city and its transport hub with New Zealand’s sixth busiest airport. Nelson is a thriving provincial centre with a high concentration of artists and other creative types, and a well established cafe culture. 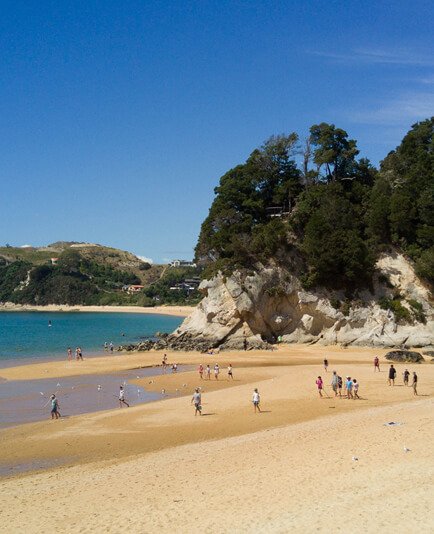 Mapua is a quaint seaside village with a vibrant wharf area lined with cafes and gift shops. Motueka is a flourishing rural hub with more than its fair share of parks, green spaces and long stretches of wonderfully undeveloped waterfront.

Motueka is the closest ‘major’ centre to the Park, an easy 20 minute drive through Riwaka and over the Marahau hill. Motueka, or simply Mot to locals, is well serviced with shops, supermarkets and just about anything you will need during your visit. Motueka also has a wide variety of accommodation options so is a good base from which to do day trips into the Park.

Kaiteriteri is one of New Zealand’s most iconic golden-sand beaches, and although it has been heavily developed over the past ten years, is still consistently featured on lists of the most beautiful beaches in the world.

Separated from the rest of the world by a reasonably significant hill, Golden Bay is one of the most easy-going, relaxing and special places in New Zealand. Its isolation from the rest of the country is what makes it so special. Golden Bay features some of the most remote and stunning beaches that we hope will never be spoiled by human intervention.

The Tasman District features some of the most fertile soil in New Zealand so has a long history of supplying the country, and beyond, with outstanding fruit, produce and wine. The villages and towns located along the coast and among the horticultural areas all have their unique charms and attractions.